I HAVE BEEN BLOGGING

If you follow me on any of the other social media sites, you’ll know that I lean heavily on the #WTFparenting hashtag.

I sort of have to.

It’s much easier to laugh at the kinder-insanity than worry about it.

“Mom, I’m going to ask you some questions. Your answers don’t have to be right but they all have to rhyme with potato.”#WTFparenting

You can get irritated and annoyed, or you can admire how much they learn from you on a daily basis. For example, this one is clearly her father’s daughter:

7yo: Mom, can we watch the thing?
Me: What thing?
7yo: John Carpenter’s The Thing. Can we watch it?
Me: WTF?! NO.#WTFparenting

And her mother’s daughter:

Instead of a bedtime story, she somehow talked me into teaching her how to draw butts. Sorry in advance.#WTFparenting #parenting101

She spent a week drawing butts. She got quite good at it.

Notice how they go from being just regular butts to farting butts. And how eventually, they gain wheels. I had nothing to do with that. That is 100% her.

Like any responsible parent, I pinned this masterpiece to the corkboard in the hallway so I can snicker at it every time I walk past. 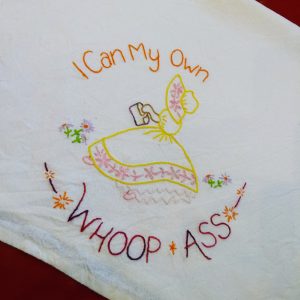 This is one of my favorites.

And it hits me. The butts! I’ve been giggling at that masterpiece for five years. Why not?

9yo, After the Oscars, Get Out, a complicated conversation about people and part 4 of Price & Prejudice (BBC miniseries): uh, Mom? I just have one question. Me: Sure! What do you need? 9 yo: Are you over there just sewing a bunch of butts on stuff? Me: …no. Shut up and watch the show. #wtfparenting

But I LIED! I was sewing butts on stuff. And today, I am proud to present to you my daughter’s artistry, immortalised in variable thread-count. Behold:

Evolution of a Fart on Wheels 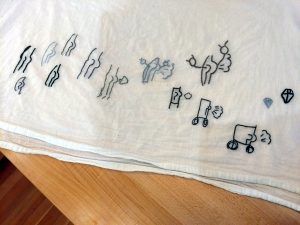 So far, November has been pretty huge. On Wednesday, November 1st, Double Blind won the 2017 Kindle Book award for Mystery/Thriller! Which means I get to officially use this: 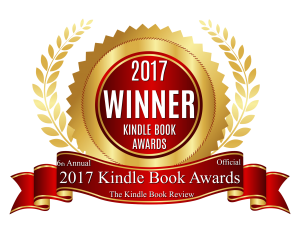 It’s so cool! It’s got those fancy wheat sheaves and everything. I’m not exactly sure where to put it though so I stuck it here for now until I get that part figured out.

My hearty thanks to all the judges at the Kindle Book review, and everyone involved in that process. Everyone has been so nice about everything. I wonder if they ever tire of all the exclamation points in the emails they must receive. For the record, I did try to tone it down.

But that’s not all that happened last week! Oh heck no.

We also survived my daughter’s first ever horror movie marathon. Poltergeist, Halloween, The Blob, and The Thing. She loved every minute of it. It was awesome. For the record, she has been asking for a long time.

7yo: Mom, can we watch the thing?
Me: What thing?
7yo: John Carpenter’s The Thing. Can we watch it?
Me: WTF?! NO.#WTFparenting

MY KID AND HIS BFF WENT AS AN AMAZON DELIVERY GUY AND A BOX FOR HALLOWEEN.@candysunick #WTFparenting pic.twitter.com/VMfUv3KZ2A

And that Friday, after stocking up on cheese, crackers and beer, my BFF Candy and I left for a weekend writing retreat. We holed ourselves up in an old logging cabin on the Olympic peninsula and wrote all weekend. 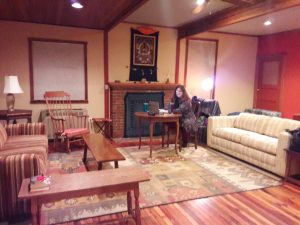 Technically, it’s 3 logging cabins stuck together to make one larger cabin but it still has creepy scratching noises and occasional spiders in the sink. #SOGREAT

On Saturday, I finally finished the first draft of Parallax! (Book three in the Thanatos Rising series.) I didn’t even cry this time.

So to celebrate all these awesome things, Double Blind is going on free sale. Starting November 18th through the 22nd, Double Blind will be downloadable for free. After that, it will be out and about! On Kindle, Kobo, Nook and Apple (just as soon as I can figure that one out).

Sunday, July 3, 2016 Books, I HAVE BEEN BLOGGING, Writing Permalink

I don’t. I write in some weird hybrid genre that I have never successfully been able to define. The closest I’ve ever come to describing it is “Humrous SciFi with a cat in it.” Even though the science is more pseudo-science and there’s little fantasy save for the fact that one of the main characters is a 32 pound (mostly) Main Coon cat named Toesy. But he delights me to no end so I’m sticking with him for meow now.

I highly doubt my consciousness had any executive control over genre when I sat down to write my first book. I remember choosing to set it in Seattle (because that’s where I know) and that’s about where all my thoughtful input ended. Everything else stemmed from conversations I had in my head. Because that’s where the writing process happens for me.

I talk to everything. That may or may not surprise you, depending on how much time you and I have spent in respective company but it’s true all the same. Bugs, trees, myself, the dog, I have a thousand conversations a day. So when I’m writing a scene and a cat wanders into it and starts talking about murdering stuff, I don’t think that’s abnormal. Why would it be? I talk to my real cat all the time. Granted, our conversations are mostly about canned food or ear scratches but, we do talk. 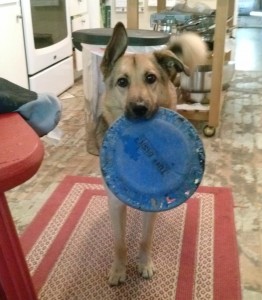 This guy is much less subtle. Although he enjoys talking about cat food as well.

Talking with my characters lets me get into their heads. I see their desires and prejudices. I discover their motivations. I could put all that together myself by writing everything down and meticulously tracking all their character traits but honestly, a simple conversation will reveal more and requires much less work. I take notes, for sure, but it’s more like dictation than character building.

So no, I can say with confidence that I am definitely not in the driver’s seat here. I write what entertains me and the genre in which I write is based in what I find entertaining. Who knows what I’ll find entertaining? If a giant purple gorilla were to walk into my next scene and start singing the National Anthem in sign language, I’ll listen to his story.

If it makes me laugh, I may even use it.

Wonder how the other people do it? Check out these posts by Michael G. Munz and Camela Thompson for their answers to the genre problem.